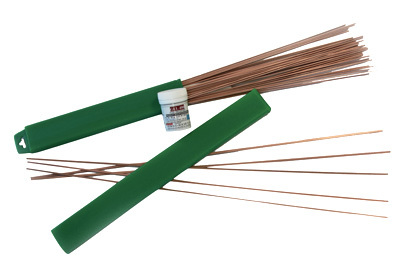 These brazing alloys are often used with powder, paste and gel fluxes. Depending on the application, they are offered as bare or coated rods, bare or cored wires, laminates, tapes and preforms. These products are mainly used in construction and mechanical and electrical assemblies. For brazing alloys in cream form, please refer to the specific datasheet. Waste originating from the use of these products can be recycled. Contact our recycling department to find out more.

This table shows the most commonly used alloys.

(*) ATG approved with AGFLUX flux (approval no.1530) for the capillary brazing of copper pipes designed for use in combustible gas installations.

(*) ATG approved with AGFLUX flux (approval no.1585) for the capillary brazing of copper pipes designed for combustible gas installations.

(*) ATG approved with AGFLUX flux (approval no.1530) for the capillary brazing of copper pipes designed for use in combustible gas installations.

Dimensions and weights are given for informational purposes only and may vary depending on the production run.

Have you defined the type of application? Contact us our staff will be happy to assist you in deciding which alloy to choose.

The product safety datasheet below is available upon request from the METACONCEPT Group.

Before brazing, it is imperative that any layers of oxides are removed along with any impurities such as traces of rust, scale and verdigris. This procedure may be carried out mechanically (wire brush, sandpaper, grinder, file, etc.) or chemically.

Thick layers of grease or oil should be wiped off or removed using solvents (e.g. acetone) for sensitive parts.

To keep the parts being assembled in the correct position until the filler metal solidifies, they should be fixed ensuring that there is a narrow soldering gap between them of between 0.05 and 0.2 mm.

If the flux is contained within the coating or if the filler metal is auto-fluxing, you can proceed directly to the brazing stage described below. Otherwise, apply an external flux.

As soon as the flux has been applied evenly and the temperature of the filler metal has been reached, apply the latter to the soldering gap.

The filler metal permeates the space between the two parts being assembled via capillary action.

Leave the parts to cool in their holding brace until the alloy solidifies.

The part can then be removed from its support.

To avoid corrosion, flux residues must be removed after brazing using a wire brush or a piece of sandpaper.

The brazing alloy provides a highly durable assembly of parts made of copper, copper alloys or steel.

As the fusion temperatures are in excess of 600°, you must use a very powerful heat source such as an oxy acetylene torch for example.

To prevent burns caused by the molten metal, it is advisable to wear a protective apron, shoes, gloves, helmet and glasses.

Comments :
Always use a flux suited to the intended use. Contact our technical department to ascertain which product is most suited to your application.All of the information contained in this document is provided for informational purposes only and the METACONCEPT Group will not be held liable for it.

Receive the brochure in PDF

See product
Back to catalog
We use cookies on our website to give you the most relevant experience by remembering your preferences and repeat visits. By clicking “Accept”, you consent to the use of ALL the cookies.
Cookie settingsACCEPTReject All
Manage consent

This website uses cookies to improve your experience while you navigate through the website. Out of these, the cookies that are categorized as necessary are stored on your browser as they are essential for the working of basic functionalities of the website. We also use third-party cookies that help us analyze and understand how you use this website. These cookies will be stored in your browser only with your consent. You also have the option to opt-out of these cookies. But opting out of some of these cookies may affect your browsing experience.
Necessary Always Enabled
Necessary cookies are absolutely essential for the website to function properly. These cookies ensure basic functionalities and security features of the website, anonymously.
Functional
Functional cookies help to perform certain functionalities like sharing the content of the website on social media platforms, collect feedbacks, and other third-party features.
Performance
Performance cookies are used to understand and analyze the key performance indexes of the website which helps in delivering a better user experience for the visitors.
Analytics
Analytical cookies are used to understand how visitors interact with the website. These cookies help provide information on metrics the number of visitors, bounce rate, traffic source, etc.
Advertisement
Advertisement cookies are used to provide visitors with relevant ads and marketing campaigns. These cookies track visitors across websites and collect information to provide customized ads.
Others
Other uncategorized cookies are those that are being analyzed and have not been classified into a category as yet.
SAVE & ACCEPT